Representative of UNHCR in Japan Pays a Visit to KGU, Encourages Students in the Graduate Course for UN and Foreign Affairs 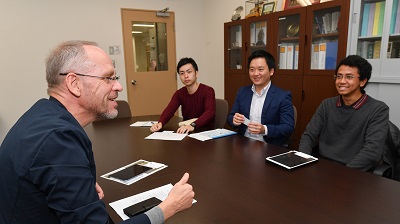 Mr. Hebecker and the graduate students

On December 4th, Mr. Dirk Hebecker, Representative of the United Nations High Commissioner for Refugees (UNHCR), paid a visit to Kwansei Gakuin University. Ever since KGU accepted refugee students as undergraduates under the leadership of former President Kazuo Hiramatsu, the university has been at the forefront of introducing such programs among Japanese universities. Mr. Hebecker had an informal talk with Professor Jo Funaki, who had deep connections with refugee students through his time as the head of the Institute for Human Rights Research and Education and as university chaplain, as well as Professor Takahiro Shinyo, Dean of the Integrated Center for UN and Foreign Affairs Studies, and Professor Shun-ichi Murata, Dean of the UN and Foreign Affairs Studies Program Office. He also met with three students who are currently in the Graduate Course in UN and Foreign Affairs Studies, and talked to them about career building, as well as his own experiences. 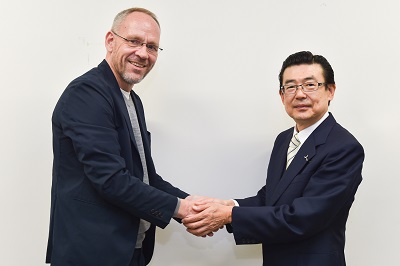 The three graduate students, who are studying in different fields - International Studies, Human Welfare, and International Management - are in the same course, with the aim of working at the UN or other international organizations. As he shared his opinions with the students, Mr. Hebecker stated that “When I got the post at the UNHCR, though I didn’t have much specialist knowledge about refugees, being able to speak an unusual language (Vietnamese) was useful.” With regard to languages that they needed to learn, he said, “If you’re thinking about a career at the UN, in addition to English, you need to be able to speak the official languages of two other countries. Competition is fierce, so if you can only speak English, that won’t get you to the final round of deliberations.”

Mr. Hebecker also stressed that UN operations were funded by the economic support of its member states. Moreover, he said, “Until you apply to JPO, you should accumulate related experience at groups like UNV and JICA. In terms of things that you can do as students, you should volunteer to support refugees at NPOs and other organizations, or intern with the UNHCR.” As he stressed the importance of expertise at the UN, where there are many different kinds of jobs, he encouraged the students for their strong desire to work at the UN. The students also listened intently to Mr. Hebecker’s explanation of his personal experiences.