The ‘Global Academic Port’ initiative is the university reform plan for establishing a homeport in which academic exchanges take place, by students, faculty and staff, both local and international, to enable the cultivation of world citizens who embody the school motto ‘Mastery for Service’.The initiative has been funded by the Ministry of Education, Culture, Sports, Science and Technology in Japan (MEXT) under the Ministry’s ‘Top Global University Project (2014-2023)’. Through the implementation of the initiative, KGU is aiming to be a respectable ‘Top Global University’.

The initiative can be described concisely with the following five keywords:

Unique Actions Based on the Features of KGU

The ‘Global Academic Port’ initiative has been formulated on the basis of distinctive KGU characteristics. These characteristics are exhibited by the following three slogans proposed by Dr. C. J. L. Bates, the first President of KGU, ‘Mastery for Service,’ ‘Launch out into the deep’ and ‘We have no fences.’ 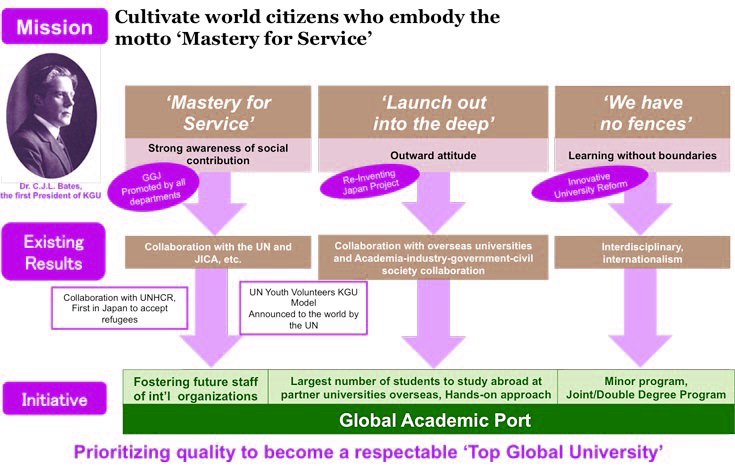